How to Get a Ticket at LAX 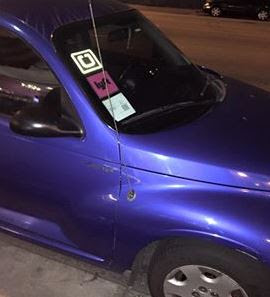 Someone posted this photo in an Uber/Lyft Drivers group on Facebook. This improper display of Trade Dress can result in a ticket by LAX Police. Fines could be up to $1000 and vehicles may be impounded until fines are paid.

They do not play games at airports and drivers need to know the rules.


Posted by Anthony Ashlin at 10:11 AM No comments:

Caught on Video: Ride share passengers should behave themselves

Bratty rich doctor gets drunk and makes a huge fool of herself in Uber car. 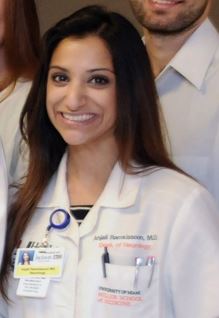 Initially she was identified on the Web as Anjali Ramkissoon, a University of Miami medical student. The "100 pound girl" was so drunk that she tried to get into someone else's Uber and the confusion resulted into a horrific melt down.

Shortly after the video went viral the University of Miami released a statement saying that she has no affiliation with the University but is "a fourth-year neurology resident employed by Jackson Health System, has been placed on administrative leave, effective immediately, and removed from all clinical duties. Jackson has launched an internal investigation. The outcome of the investigation will determine if any disciplinary action will be taken, up to and including termination."

The incident was caught on video and released on social media. Now the young lady earned her 15 minutes of fame.

We’ve all seen drunken idiots before, but this takes the cake. She tries to take someone else’s Uber ride, but the driver won’t let her. Then she gets in the car, won’t get back out again, and starts throwing all his paperwork, scissors, phone and other articles straight out the window!

All while mocking him for calling the police, because as she says, she’s a ‘5 foot tall, 100 pound girl’. No one can touch her, right?

"Eventually the driver gets out and says he’s calling the cops to get her out of the car. After a couple of minutes of the driver pretending to talk to the cops (im assuming he was pretending because they never showed up at first), the girl decides to reach into the front seat, grab his keys, and start walking away with his keys in her hands…. That’s where the video starts…

The police finally showed up after this video ends. The girl was in a taxi cab about to leave when the showed up and they had to stand in front of the taxi and tell him to stop. The girl eventually got up from the area the cops had told her to sit and wait, and tried to walk away from the scene.

Once in handcuffs, she then tried kicking some of the police officers on the scene. It was only when they put her in the police car that she started crying, apologizing, and claiming that she would lose her medical license (she claimed to be a neurologist) if she got arrested.

The Uber driver was too good of a person and decided to take a cash settlement instead of pressing charges. In his words, “…she was crying (and) said (she) was sorry for everything.” I don’t want to disclose the amount the driver was paid, but can say he could only use the money to pay his cellphone bill and maybeee his cable bill."

So she even managed to bribe her way out of getting in any real trouble!
Or did she…

Well, she said she was a neurologist. This disgraceful video might have been her career ending moment!

So now we know her as drunken uber pest Anjali Ramkissoon, second year neurology resident. Maybe, ex-resident soon? Because I wouldn’t be getting treated by someone who gets up to this behaviour.


For more information go to: http://www.irumormill.com/iRumors/100-pound-uber-drunk.htm
Posted by Anthony Ashlin at 1:14 PM No comments:

SideCar - Why we sold to GM

Why we sold to GM

Yesterday news broke of General Motor’s acquisition of Sidecar assets. Why the sale? In short, we were forced to shut down operations and sell. We were unable to compete against Uber, a company that raised more capital than any other in history and is infamous for its anti-competitive behavior. The legacy of Sidecar is that we out-innovated Uber but still failed to win the market. We failed – for the most part – because Uber is willing to win at any cost and they have practically limitless capital to do it.

When it was clear we needed to sell the company, it was important to the board and me that we continue Sidecar’s spirit of innovation and land Sidecar employees in great jobs. Finding a buyer like GM fulfilled our goals. Once the term sheet was signed with GM in December and the strategy was clear, we ceased operation of our ride and delivery operations and focused on closing the deal.

With the acquisition of Sidecar assets, GM gains the team and technology to accelerate their mobility plans and grow their new mobility offering into a world-class transportation service. The key component to the transaction is a license to Sidecar patents*. Sidecar retains ownership of those patents.

What’s next for me?  I’ve chosen not to move on with the GM team, and instead take a break before starting my next thing. It feels almost unbelievable to me that four years ago ridesharing didn’t exist. I’m proud to have led the team at Sidecar. Together we profoundly changed transportation for the better, inventing the technology that enabled the entire category like instant peer-to-peer ridesharing, shared rides, back-to-back rides, shared ETA, driver directions, and so many more.

I wish every member of Sidecar all the best. GM now has one of the most innovative, fastest-moving teams in Silicon Valley working for them.

* Sidecar holds the US Patent #6356838 for “System and method for determining an efficient transportation route” and has other patents pending.
Posted by Anthony Ashlin at 8:17 AM No comments: 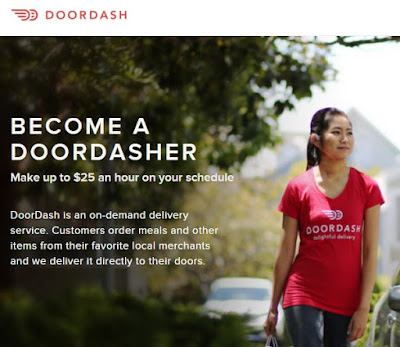 Last year I signed up to drive for Sidecar. One of the services they provided was delivering meals and flowers for patrons of other on demand apps.

I noticed that people ordered meals during the times where less ride share patrons requested services for pick up.

I liked being able to make extra income during the rider slumps so
I decided to drive for Doordash.

Doordash is an app that connects patrons with local restaurants and their meals can be delivered within an hour.

Just like with Sidecar, I started Doordash to earn money during the times that Uber and Lyft requests went down. In the Long Beach area, that is between 1:30 and 5:00.

In January Uber announced a drop in rates and Doordash turned out to be a life saver.

On a Thursday I committed myself to about 6 hours and managed to bring in a little over $80 by delivering meals.

Doordash can be done with any vehicle, bike or even on foot.

https://www.doordash.com/dasher/apply/
Posted by Anthony Ashlin at 8:15 AM No comments:

Uber to pay $7m fine to continue operating in California

The on-demand ride-hailing app will pay the fine to resolve a dispute over the amount of data it provided to regulators.


Uber, the on-demand ride-hailing app, has agreed to pay a California regulator more than $7m in order to keep operating in its home state.
The San Francisco startup said on Wednesday evening that it will pay the California Public Utilities Commission, which governs transportation companies, to resolve a dispute about the amount of data it provided to regulators.
The incident marks the latest example of fast-moving startups learning to navigate a web of statutes they may not realize govern their companies.
A state judge this summer fined Uber $7.3m for failing to provide information on its vehicles, such as accessibility and problems with drivers. Uber said it is still appealing against that decision.
But on 13 January, state lawyers recommended a ruling that gave Uber 30 days to pay the fine or else lose the ability to operate in California. The CPUC is expected to approve that recommendation on Thursday.
“In the meantime, we will pay the fine and continue to work in good faith with the commission,” an Uber spokeswoman said in a written statement.
Posted by Anthony Ashlin at 12:19 AM No comments:

I received an email from LYFT last night about mandatory training in order to pick up and drop off passengers at LAX.

I learned some things that I did not know.

1 - Passenger Pick Ups should be done at the Ride Share Pick Up areas.  These area located between terminals in the DEPARTURE level of LAX.

2 - Passenger drop offs should also be done at the Ride Share Pick Up areas.

3 - Keep your App in DRIVER mode until exiting LAX area.

4 - Do not rate passenger until you leave the LAX area and are parked.

Training for JOHN WAYNE is also available in the session.


If drivers have not gotten the email please contact your LYFT team.
Posted by Anthony Ashlin at 7:23 AM No comments: