What happened to presumed innocent before being proven guilty?

The irony is that Lyft requested the same background check from CHECKR and it came in with no delay or temporary deactivation.
If you depend on Uber for your sole income, best find a back up gig. Thousands of drivers are being placed on hold over delays in background checks.
If you would like to sign up for LYFT here is a link to a promo code and special offer:
SIGN UP HERE 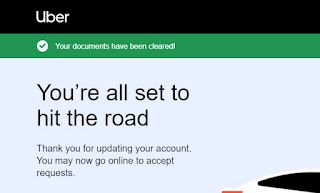 Posted by Anthony Ashlin at 8:20 AM No comments:

Uber could stop allowing drivers in California to set fares and view customers’ destinations, according to a recent report.

The ride-hailing app started testing those policies in January 2020 as a way to sidestep California’s gig worker law, AB5, which requires companies to treat gig workers like employees.

By allowing drivers to set fares and see customers’ destinations before picking them up, Uber said it was giving drivers more flexibility and control, FOX Business reported at the time.

However, more than a year later, the company is reportedly admitting that those policies have been bad for business and have made the app unreliable, the San Francisco Chronicle reported Monday.

Update: Source Tony Ashlin
Drivers received a policy Update on April 8, 2021 saying that owing to a 117% increase of rider cancellations, Uber will be ending the set your own surge policy shortly.

Drivers and those who wish to voice their opposition to the policy change are encouraged to call Uber at 800 539-7069.
Posted by Anthony Ashlin at 10:55 AM No comments: