LAX is set to bar curbside pick-ups by rideshare and taxi drivers, and instead will require travelers to take a shuttle bus to a designated lot to catch their ride. Drop-offs will continue to be allowed on the upper deck of the airport.

The changes to the curb operations at the major airport are set to take effect on Oct. 29 at 3 a.m., according to an advisory from the airport.

An LAX spokesperson tells Eyewitness News there will be frequent shuttle routes and will be within walking distance from the airport.

The airport has seen an increase in travelers and is in the middle of a modernization project.
Posted by Anthony Ashlin at 6:16 PM No comments:

How Many Moving Violations Will Deactivate a Driver from Lyft and Uber?
If you are thinking 3 you might be surprised. 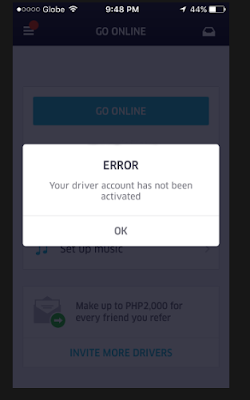 One of the most feared messages TNC drivers can read on mobile devices say that they have been deactivated.  In hindsight, perhaps, they think they should have signed up for traffic school after that ticket last month.

It has been a big misconception among drivers that an automatic deactivation can occur after 3 moving violations. After a friend got deactivated from both Lyft and Uber we learned that this is not the case.

After two moving violations appear on the driving record, which the TNC companies check periodically, a red flag goes up and other items on the Department of Motor Vehicles (DMV) report go into consideration.  My friend had two accidents listed on the report. Both accidents were not my friend's fault but nevertheless were documented on the report, which was enough to get the driver deactivated from both TNC companies.

Uber was not at all helpful when asked as for a reason, but after paying a visit to the Los Angeles Lyft hub a representative shed light on the mystery and offered suggestions as to how to rectify the report. He suggest that a call to the main DMV office in Sacramento is the best way to begin the process of expunging the items on the report. If the accidents are three or more years old, the DMV might be able to expunge them from the record. The DMV might also help with a citation removal with proof of the completion of a driver traffic school class. According to the California Courts website, a repeat traffic school certificate will not be honored if the driver took a course for a citation less than 18 month earlier.

Link to the text of California AB-5 Worker Status

Follow this link to read the text of AB-5

https://leginfo.legislature.ca.gov/faces/billTextClient.xhtml?bill_id=201920200AB5
Posted by Anthony Ashlin at 3:35 PM No comments:

California approves bill that will turn gig workers into employees

Attention Uber and Lyft Drivers in California.
Please call the office of Governor Newsom to support or oppose this passage. The bill will end up on his desk for signing but he needs to hear from us to weigh in his decision.

SOURCE: https://www.cbsnews.com/news/ab5-bill-passes-california-approves-ab5-bill-that-will-turn-uber-lyft-gig-workers-into-employees/
California lawmakers have passed a bill that would provide new wage and benefit protections to workers at so-called gig economy companies like Uber and Lyft. Such app-based businesses, worth tens of billions of dollars, have vowed to fight the measure.
The 29-11 vote late Tuesday sends the bill back to the state Assembly for final approval over strident Republican opposition. Democratic Gov. Gavin Newsom has said he supports it. About 400,000 Californians who work for app-based companies could be impacted by the measure, according to the Los Angeles Times.
Assembly Bill 5, also called AB5, has drawn staunch opposition from on-demand delivery and ridesharing companies while winning support from many of the Democratic presidential contenders. Gig economy work has been blamed by some economists and labor activists for increasingly precarious work conditions for on-demand workers, who lack protections received by full-time workers such as paid sick time, unemployment and disability insurance and retirement benefits.

At the same time, gig-economy work has proved lucrative for employers, who can save as much as 20% of their costs by shifting to contract workers, as noted by a 2016 UCLA paper.
The California Labor Union said the bill's passage sets "the standard for the rest of the country to follow."
"The misclassification of workers creates a corrosive effect that ripples through our entire economy, undermining our laws to protect and support working people," California Labor Union chief officer Art Pulaski wrote in a Wednesday blog post. "AB 5 is a powerful counter to the corporate greed and rampant exploitation that's driving inequality across our state in emerging and traditional industries, alike.

AB5 puts into law a California Supreme Court decision making it harder for companies to classify workers as independent contractors. The bill would make those companies classify their workers as employees instead.
Last month, Uber and other app-based businesses that rely on gig workers said they would spend $90 million on a ballot initiative that would exempt them from AB5, if it becomes law.
While the bill's impact on gig economy companies has drawn most of the attention, it would affect a wide array of industries.
Uber, Lyft and other ride-sharing drivers went on strike before Uber's IPO in May, demanding, among other things, a more equitable pay structure. The labor action came after Uber shifted its pay structure to shift from compensation based on a percentage of the fare to paying on a per-minute and per-mile formula. Uber had also cut compensation for drivers in Los Angeles from 80 cents a mile to 60 cents.
Posted by Anthony Ashlin at 3:11 PM No comments:

Today, Uber sent out a notification that they are changing the rate of pay for drivers.

One important thing to know, as I have compared notes with some of my fellow driver is that some drivers are getting paid more per mile and minute. This may have something to do with how many rides they have given in the past. Uber has not offered any explanation to this.

If driver are going after bonuses, Uber has opened up more flexible options with Quest. So part time drivers might be able to take advantage of the challenges.

I did spread sheet comparison of Lyft vs. Uber rates and in Los Angeles driver still make more with LYFT.  Using my rate of pay I discovered that a 10 minute 10 mile ride with Lyft paid $1.20 more than Uber.

Posted by Anthony Ashlin at 11:42 PM No comments:

Picking Up at Airports, Stations and Cruise Line Terminals 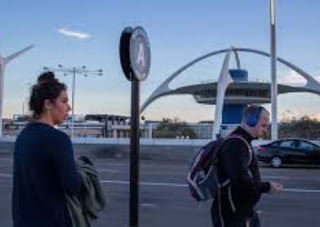 Many drivers just take off when they get a ride request, expecting that the passenger (pax) is ready. If you are caught waiting for your pax you might find yourself in trouble with the law enforcement officers in that area. Here are some tips to help things go smoothly.

Warning: The following may result in higher tips!

1: Familiarize yourself with the rules of the area you are working in. Some airports have staging areas set up for drivers to wait for rides. Many airports have designated areas for pick ups and drop offs. The rules may be posted online on a website for that particular depot.

2: When you get a ride request always call the pax to ensure they are ready for pick up at the proper place.

3: While on the phone remind the pax of what kind of car you are in and give them an estimate time of arrival.

4: While on the phone with the pax ask for the destination. Tell them if they do not see you that you will step out of the car and yell out their name and destination.

6: When you get to the destination always step out of the car, open the trunk and assist with the removal of the bags. If you have a backpack in the trunk this will prevent it from accidentally getting taken by your weary pax.

7 Always thank your guests. I usually say, "Thank you for flying LYFT or Uber."
Posted by Anthony Ashlin at 2:39 PM No comments:

Lyft app is telling drivers in staging lot to drive to airport. If the Airport Police see you waiting at the pick up area without a ride request you may be cited.

Stay put and wait for your request before driving to outer curb.
Posted by Anthony Ashlin at 8:10 AM No comments: